“egg is to cooking as the articles are to speech” ¹: Tortilla de Patatas is as beer to a swell time.

onion and potatoes in the pan 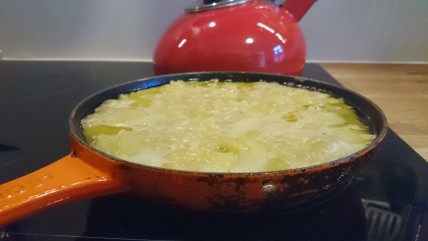 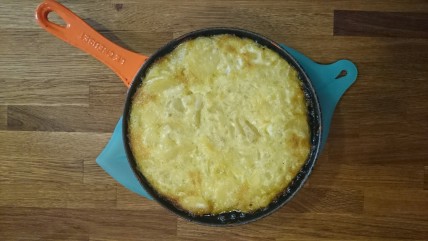 just out of the oven

Pintxos de olivas y tortilla
“egg is to cooking as the articles are to speech” ¹: Tortilla de Patatas is as beer to a swell time.

Subtly speaking, eggs pop up quite frequently in cookery as the ingredients scrapbook glue, the binders for our palate book and if we are seeking form, they make it easy for us to read it with our eyes and our tummy without the attention and hype that they deserve. Or at least I have not been to a party yet where a good long egg talk went on.

An Omelet is a classic egg form, a creation that takes on a good result even for the first time egg fryer that messed up, because they are, omelets, flexible friends, and are all over the place, either at centre stage or all the way in the back. They can be seen looking like a scroll sliced thin on rice, mixed with bits of goodness for baby-feeds-on-its-own sessions, holding together veg and more, served with bangers and mash, or delicately folded and subtly white folded onto a clean plate or one that is a national staple of spanish cooking. The Tortilla de Patatas, who is in itself, also a best friend to so many other delicious foods.

Heat, at medium low, half a cup of the olive oil in a large sauce pan. Add the sliced onions and potatoes in alternating layers: onion, potato, salt and pepper again and again until all are in the pan. Cover with a lid and let them cook slowly, turning every now and then to avoid sticking to the bottom of the pan and until both the onions and potatoes are translucent. Remove from the heat and transfer into a bowl and let cool, preferably overnight in the fridge.

Tortilla
Pre-heat the oven to 200° C. Heat the remaining half cup of olive oil in a heavy pan with rounded sides that can be used in the oven. In a separate bowl, large enough to hold the eggs and the potato onion mixture, beat the eggs with a fork. Add the potatoes and onions and turn over and over until the eggs have coated all of the ingredients. Pour the mixture into the heated pan with the oil and let it cook until you see bubbles seeping up the edges between the omelet and the pan. This will create a slight crust that will be your friend when it is time to slip the tortilla out of the pan when it is done. Transfer the pan with all the ingredients into the oven and bake for 20-25 minutes. Until the centre of the tortilla is solid and dry to touch. With great care not to get burned with the hot pan remove the tortilla from the oven. Pry around the edges to make sure it is not stuck before turning it over onto the serving plate whilst it is still hot. Wait for it to cool down before eating, it will be more solid and easier to cut.

Great paired with a cold beer, olives, fish, bread, tomatoes. Pretty much anything.