first cut, or, flap of the butterfly cut 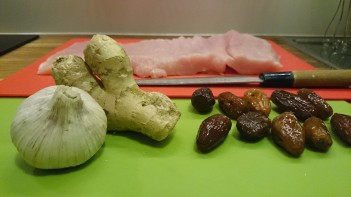 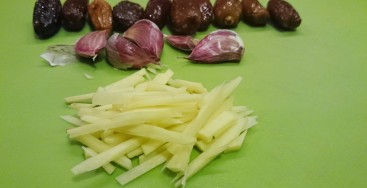 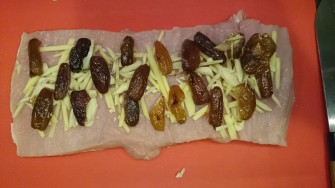 salted loin, in water and ready for the oven

The pairing of ginger, dates and pork is one to do over and over, and for this recipe sneaking or boldly admitting to adding garlic is nothing else than advocating for the sweetness of this beautiful bulbous delicacy when it is cooked. I will go off on a tangent on the bad rap that garlic has in some conversations, which makes me wonder about a lot of things. But that is another thought. For now leave your fears aside, jump the hurdle of assumption and cook and eat garlic.

So yes, there is something specially delicious about a tender, moist and stuffed roll of meat. Tender in this conversation is key to a memorable outcome and the trick to tenderness for this recipe lies in the baking with enough water, for a long time. Simply water, no mistake. The flavour will seep from the meat and stuffing, and the juices will become a wonderful sauce.

Butterflying the loin
Place the pork loin, fat side up on a cutting board, narrow end close to you, longer side perpendicular to you. With a sharp long butcher knife cut into the loin horizontally, about 2 cm deep, down the long side without reaching the other side. The easiest way is to slide the blade of the knife from top to bottom several times, avoiding a back and forward motion. The first cut will create a flap that you can open. Turn the loin around and repeat, making another horizontal cut, starting from the inside of the previous cut, cutting through without reaching the other side, followed by spreading the meat open. At this point you can decide, depending on the original thickness of the pork loin, to either make another horizontal cut to thin out further the flat end layer, or just leave it as it is.

Stuffing
Peel and julienne the ginger and the garlic. Slice the dates in half and take the pips out. Spread the julienned ginger, garlic and the date slices onto the open pork loin. Roll it lengthwise and tie it closed with the twine.

Lay the stuffed loin, fat side up, in a baking dish and add water to cover one-third of the meat. Sprinkle coarse salt on the top and pop it in the oven for 90 minutes to 2 hours, until the outside is nicely browned, the inside of the meat roll has reached 70-75° C (160° F) and if you pull on a corner of meat you can tear off a thin strip (and taste it, hummmm). Once ready, remove the loin from the oven, take the meat out of the baking dish and leave aside. Pour the juices from the baking dish into a saucepan, season with salt and ginger pieces and reduce over medium heat for about 15-20 minutes.

Cut the string off the meat and serve sliced with the sauce and vegetables of your choice. Carrots, shallots, potatoes or green beans for example. The loin is also delicious for sandwiches in a crusty bread with mustard, the sauce and peppery greens, such as cress or roquette.