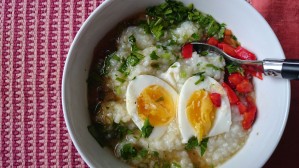 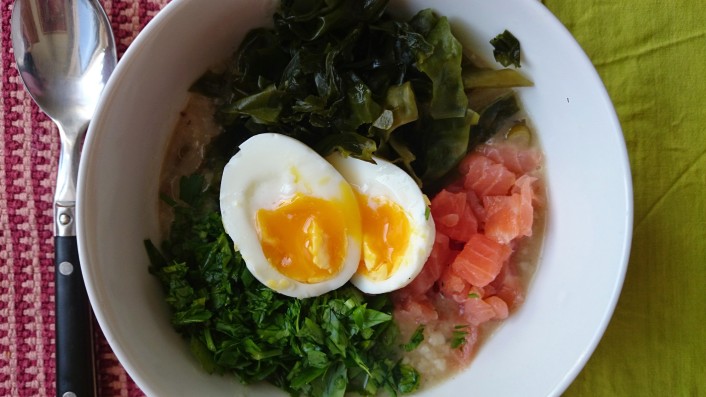 Congee, as it is better known in English is a rice porridge from Asia. Its name varies by country, region or language and the list of names runs long. For instance in China it is referred to as Jook in Cantonese and Zhōu in Mandarin. The origin and popularity of the dish is old enough, long enough and great enough to make these details unimportant. Congee is an established food ate as a baby’s first solid, to -one can say- your last meal. The cooking method varies slightly in every country, region, home, kitchen and table, but unlike the origin, this difference is easy to track and lies predominantly in the choice of water where the rice or grains are cooked. Either simply water or stock or broth. Thereafter the variations expand. Congee can be served as a side dish, usually in its most simple form, or as a main dish garnished with meat, vegetables, herbs, sea grasses, salted duck eggs, tofu, condiments….. There is not much of a defined line around how or with what you can eat it.

The basic method of making Congee is what makes it such a healthy dish, far away from spared of flavour and texture. When used as a side dish it elegantly holds the ground as a clean canvas for the flavours of other dishes. Congee is as old as it is wise and considerate, and it makes you well.

Method
Place the rice and liquid in a pot and bring to a boil. Turn down to a slow simmer and cook for about two hours with a slightly ajar lid. Once the rice grains have opened up and curled back and the consistency is thick, the congee is ready.
An alternative method is to leave the rice grains soaking overnight and cooking after soaking, This reduces the cooking time. Serve warm, as a side or as a main dish with garnishes of your choice. Congee can be kept in the fridge and reheated before serving. Very easy as a baby food base or an ‘instant’ soup base.